"Walls: The Books of the Revolution"

We have seen him before on this blog, the spray man above, drawn on the day the 23-year old Nour Hatem Zahra was shot in the leg by the Assad regime and bled to death.

His spray colleagues let him merge into the walls, making his portrait not just an icon of freedom, but an artwork in itself.

It is a constant eyeopener how the stenciled faces of the martyrs are the very essence of grasping a likeness. Deceptively simple, they have intensity and are immediately recognizable at the one and same time. They are not contoured as such. They are composed of heavy shadowing on certain parts of the face, although in the instance of Nour Hatem Zahra his cheek and chin are given a contour because of the leaning of his head, underlining the softly rounded youth tending towards the beholder.

Every detail has to be connected to the rest of the image in order not to be cut away when the stencil is created, which takes some planning. In order not scare anyone away from doing their own, in that as many as possible are needed, Tarek Alghorani and his colleagues made videos on how to strengthen the paper with tape and then get to it. Accompanied by music with a certain drive to it to remove any remaining restraint:


It is unmistakably Nour Hatem Zahra we see below. And yes, he is first and foremost meant to be recognized while passing him by in the street, but recognition has all through history been the very definition of the image of a ruler:


Speaking of rulers, in The Man Without Qualities (Der Mann Ohne Eigenschaften) by Robert Musil, the protagonist, Ulrich, is invited to visit a count wihthin the inner circle of the ruler. The number of portraits of the ruler in the streets is as numerous as the number of citizens of his realm, and yet he might be like the stars we see in the sky even if they were extinct thousands of years ago. Ulrich gets to meet a transparent, greyishly aged man, and deduces that the ruler himself must be the most transparent of them all. He is presented with a paper that might be a task for him or the warrant of his arrest. He leaves with the sense that he has seen a piece of reality.

Assad is as transparent in person, as his portrait was to be seen everywhere. To the world outside he seemed to embrace the new century with its social media. A cartoonist even seemed to be favoured. Ali Ferzat was allowed to create his own magazine and when the neighbouring countries complained of the drawings therein, Assad would each time grow a little in the eyes of the world.

All the while the bloggers and journalists were being tortured in prison. Ali Ferzat was in trouble himself, but even to his countrymen he still seemed to be in favor. Until the first graffiti artists took to the streets, and Assad had to reveal his real face. 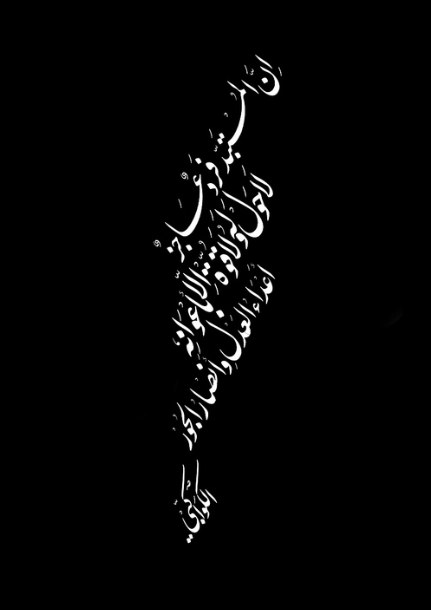 The autocrat is a helpless person
Has no ability nor power but his succours
Enemies of justice, allies of oppression

The quotation above is one of the most beautiful stencils made in Syria these years. Again, simple and yet literally poignant, undressing the one in power.

It is notable how the stencils do not call for violence nor do they show any. Those killed by the regime are not shown battered or tortured in death, but remain the vibrant and intelligent persons they were in life.

The moral superiority belongs to the graffiti artists. The one to the right, which is also to be found as a stencil is my personal favorite. A symbol of prohibition to ensure that order is maintained. Movement is not allowed, but then one part is being removed, movement within the immobility, and all of a sudden we have an image of civil disobedience:


Assad has reacted blindly like rulers before him have done in history. They ban the access to the means to communication, paper for instance, or in this instance the spray can. An identity card has to be shown when buying one. Only, yet again the protesters knew how to organize solutions. A cola bottle and the air from a wheel:

"Not freedom but dignity
Dignity in the simplest forms

There is a famous clip of a soldier hit one people and say to him: You want freedom?

And beat him and say to him: this is for freedom For what? Freedom

Despite the lack of freedom
People are looking for dignity"


Tarek speaks of the walls as carriers of action and hope:

"Usually the system sends the militias in order to erase graffiti
Walls in all cities, squares and neighborhoods
Was written over or painted black
Effacement in black after we had drawn on the full wall all night
Especially after we had drawn the flag of the Revolution for long distances - more than 10 meters -
Then Assad had the walls broken down by (his thugs) shabeeha ......
I stopped the deployment of additional stencils
And went on to work erratically
A campaign, which was scheduled to be a week
lasted more than 4 months unabated


"The streets to us Walls to us We the People And on the walls We will paint express ourselves And raise our voice Walls: the books of the revolution Free peoples' books
Art of the system (with the dots in red and green, for the blood or love and the holy colour, respectively)