"Poverty is the worst form of violence" 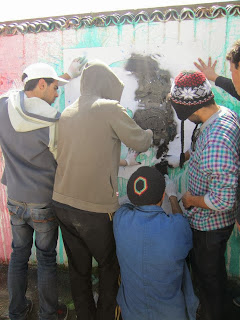 - as Mahatma Gandhi made clear and so he became a stencil by the mural protesters in a new century.

Zwewla addresses poverty in their very name. Poverty is a violence exercised by those (few?) in power, but as soon as poverty is named, it is a warning too against those (still few?) in power. A warning in three stages as painted on the walls in Sidi Bouzid, a significant city in this respect, in the beginning of October 2013:

They are almost 90 years apart the Danish poster by Valdemar Andersen from 1927 and the Tunisian mural by Zwewla of this year.

Yet they are remarkably alike in their black rendering of the body locked in the apathy of unemployment. In the poster the child is trying to reach his father, whereas in the mural it is the child itself that is outside the reach of the outside world in the apathy that characterizes the whole family when unemployment strikes.

Poverty has its iconography in art like any other. Or maybe we should say we have two sides of this type of iconography. There is the one intended for the salons and galleries in which the bourgeoisie has seen destitute children in the snow, calling on the pity and sense of doing good of their beholders. It is now a controversial approach since it calls for philanthropist to take action and that is the type of action that tends to shape the lives of the poor unto their own image.

It is still the one used for campaigns, though, in that none of us can bear the direct gaze of a child.

And then there is the other one, the activist one.

This too is calling to action, but in direct opposition to the one in the galleries, this one is intended for the the actual afflicted, and usually comes in the form of posters, leaflets and murals. It is art to be met with in public space for everyone to see - the afflicted as well as those who would rather not see them mobilized.

Zwewla has added a new motif to the iconography on desperation. A high-octane image that implies no movement, not even of a demonstration, but a three-fold bomb about to go off. It is a confrontation. And yet is imagery without violence.

I come from a country that should know. From the happy point of view. The poster above was made right before an important change took place in Denmark. In 1933 our social laws were streamlined and help was no longer something you had to beg for. From then on you would keep your rights as a citizen, such as the right to vote, as citizenry was a basic right even when unemployed, ill or too old to work. The economic assistance was at this time still very basic, but it was a fact and health care for one was free.

1933 was also the year that Hitler came to power right south of the border, but the Fascist ideas gained no ground here. There was no desperation to build on.

And then we come to the city of Sidi Bouzid:

Antonio Gramsci, who was a political prisoner 1926-34 for being a Communist in Mussolini's Fascist Italy, wrote from prison on the importance of achieving a critical outlook. The critical stance was what separated one from the masses, from being a mass man, I think Gramsci called it. To this end was needed a beneficium inventarii to make oneself clear of the how and why of what went before.

Sidi Bouzid is the place to write newest history as this is where Mohamed Bouazizi set fire to himself from which he eventually died on January 4, 2011 as a protest against the harassment he experienced from the authorities. He is said to have exclaimed "How do you expect me to make a living?" before he ignited himself. His death would in turn ignite the protests that eventually turned into the Arab Spring. His portrait is the embodiment of action taken: 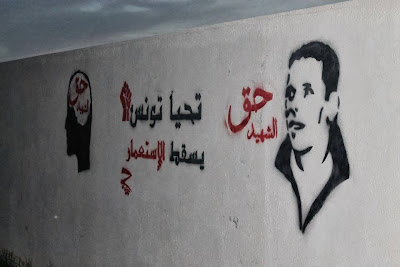 The wall with Mohamed Bouazizi in its entirety. The clenched fist is a left hand, copied from a woodcut first seen about 1968/69. The woodcut was originally made to be easily reproduced, immediately recognized, and has been used as a call for change in many respects, such as equality for women, jumping continents in the process and now taking part in this context.

A 100 years ago the Mexican artists filled the walls of the official buildings to underline the history of their people, making sure that the struggle for independence and freedom was present before the future generations. Marx was included as was industrial workers and those newly executed in the freedom struggle along with the Aztecs. Murals at governmental level, that would be the natural next goal in Tunisia?

In a way they are already there. It is just the question of the permanence of the walls that is still missing. 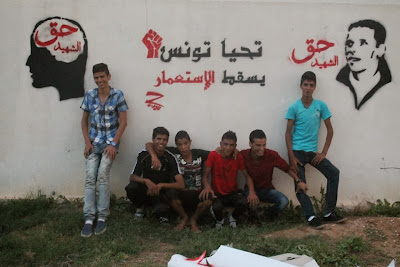 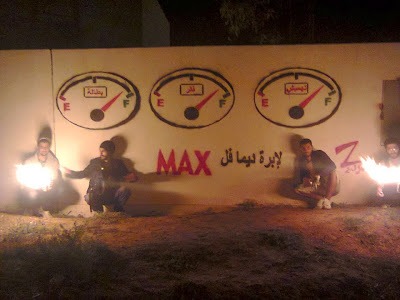 All photos courtesy of Zwewla unless otherwise stated.