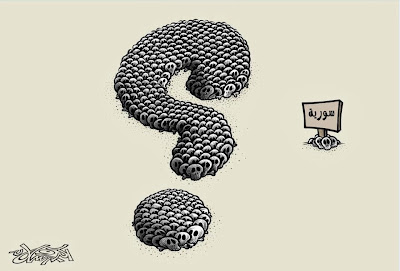 According to a report that went viral in October 2013 the Syrian cartoonist, Akram Raslan (born 1974) is no longer among us. He has been missing for a year since his arrest on October 2, 2012 by the military intelligence at the offices of the newspaper, he worked for, the government-owned Al-Fida.

He has reportedly been tortured, being moved from prison to prison, and was rumored to stand trial on June 3 2013. No information came out wether the trial took place, until said report surfaced of his execution and burial on July 26 in a mass grave outside Damascus.

The last piece of information has consistently been rejected and that he is indeed alive. Both pieces of news stem from persons close to his family, and so far we only know that his first of kin has not been informed should he have been executed. As any of us knows who have lost loved ones, the importance of keeping hope is the most important of all, so we join in the hope.

ETA: June 2014 the UN has obtained information that Akram Raslan is under investigation for "offending the state's prestige". In other words, it seems he is indeed alive, albeit having been imprisoned for close to two years by now.


His crimes? According to the UN-rumor (as we sadly have to call it now) he was charged of terrorism, including showing disrespect of the leader, being in league with the rebels and undermining the prestige of the Syrian state. Exhibit No. A: 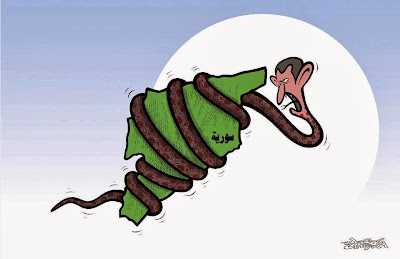 Terrorism is a flexible notion to put it mildly. The UN is for one has not as yet been able to come up with a definition which satisfies all parties. Terrorism can be exorcised by states as well as individuals and one of the reasons for the difficulties is the importance of stressing the legitimate right of the individual to express itself when in disagreement with a state in question. In a democracy the example above would be a clearcut Exhibit No. A of exorcising such a legitimate right. 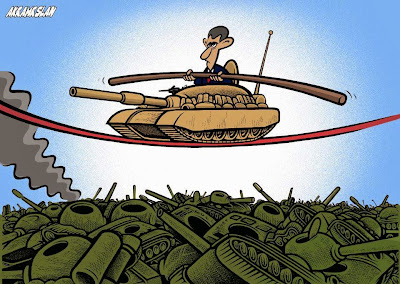 Akram Rasland has taken the right of definition literally into his drawings not just on the figurative plane. The line of Akram Raslan is of a deliberate simplicity. A thick contour denote the rounded shapes of each element of the drawing while a stage-like central light concentrates the scene. Words are scarce if there at all. Nothing shall remain concealed. 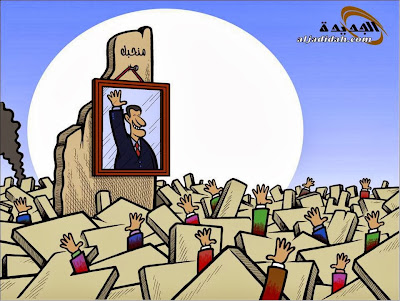 The clarity is all the deadlier considering his drawings each time covers a "messy" multitude, of skulls, military débris - débris organic and of mortar. While Akram Raslan ridicules the last of the boundless portraits clinging to its nail.

The drawings shown date from about mid 2011 when he began to comment on the conflict. He has been missing for a year, but his drawings remain as relevant as they were last year and the year before.

Akram Raslan has introduced the personification - a first? - of the UN. Perhaps one of his strongest drawings as seen from a Western perspective is the bloodied handshake which makes accomplices of us all. 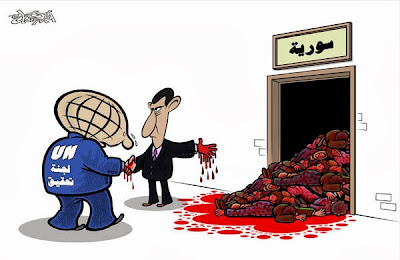 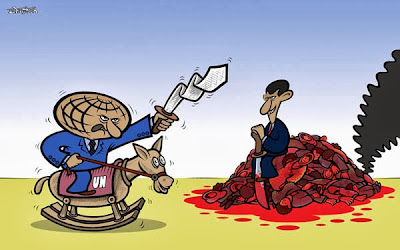 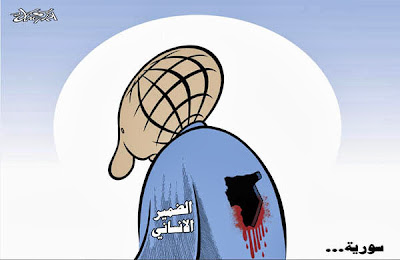 While hoping for the best of news of Akram Raslan and of Syria, let us leave the last drawing uncommented.


All photos courtesy of www.facebook.com/FreedomForTheSyrianCaricaturistAkramRaslan