Bluebeard would be jealous


When a measly passageway downstairs turns out to be a sumptuous foliage in glowing orange as painted by Valdemar Andersen there is every reason to gorge on the rest of the villa. 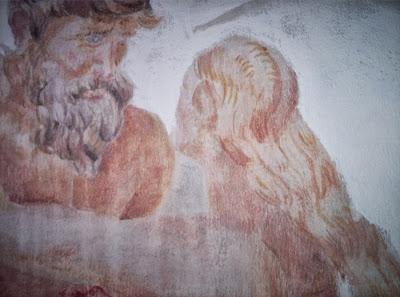 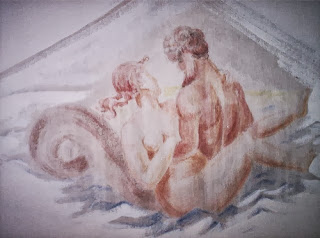 In fact you are welcomed at very the entrance by the Olympian gods enjoying the good life on land and sea alike. Mermen are stealing young women, while the sea horses of Poseidon are leaping out of the water.

Valdemar Andersen created a string of meetings melting into a frieze encircling not just the hallway, but the staircase and the first floor landing. In the busy environment of entrance and staircase that is all about movement, the role of the gods is to create a room within the room of contented well-being. 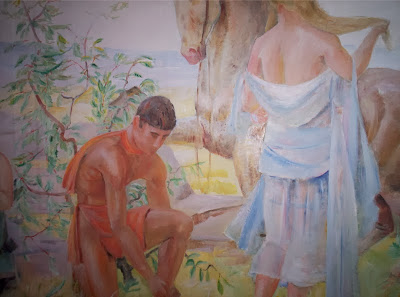 The sea-creatures are active along the stairs, but even they have a certain Northern serenity to them as the colouring is airy and on a background of white today.

On land the gods' interactions are of a more indirect nature. His reds as seen above are reflected in the draping of her blue garments, while her cooler blues are to be found in the shadows of his otherwise warm skin tones.

But this is a villa with heaven and a room of sin under the same roof. Like Bluebeard's castle this one has a secret room. Maybe not so much locked as it is placed at the furthest end below the house where you have to descend three different staircases, each of them removed from the others by the turn of a corner and not till you get to yet another corner, the fourth, the orange foliage is suddenly before you leading you the rest of the way. This is a room you will never find unless you are very much into mischief or directly invited. 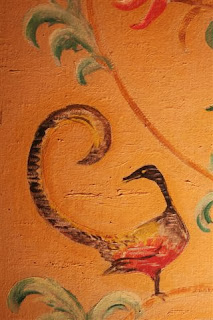 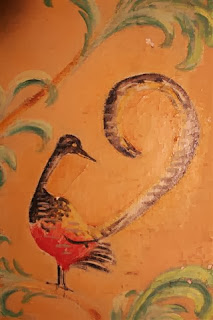 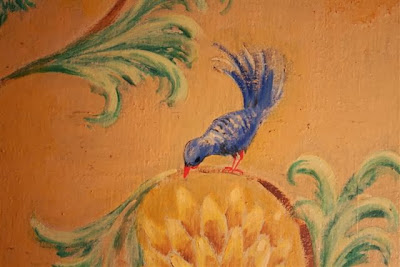 The house was built in 1921 on Solsortvej 68, Frederiksberg, in the aftermath of World War I. Denmark had been neutral in the war, but a number of businessmen had made huge fortunes selling canned food of an appallingly poor quality to the German troops. They all lost what they had gained within a few years after the war, spending freely and seldom wisely.

I for one went to school in a brothel built for these "baronets" as they were condescendingly named. I am not defending how they made their fortunes, but they did make a positive difference for the arts, the large scale decorations not least. At my school we had a fountain of stone that had once sprung wine and the floor of the library was a mosaic with the jester or the knave of a playing card. There were certain rooms here too we were not supposed to enter given the nature of the decorations, which of course we... but what I mean to say: When artists of the monumental scale, Charles Rennie Mackintosh to name one, was out of work all over Europe from 1914, their Danish colleagues were busier than ever doing commissioned work not just for state and royalty, but for private citizens daring to be different. 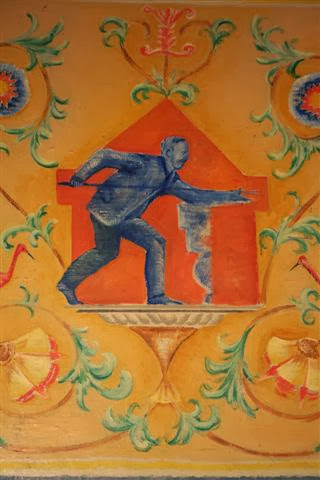 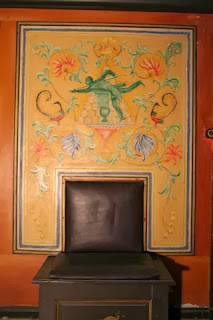 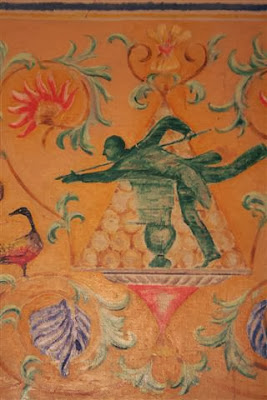 This must have been the room of his dreams. A Men Only. A pool room complete with seatings constructed as part of the walls as were the cupboards of which one was hiding a sink to secure one's hands were on top of the game at all times and another for the cues.

Everything comes together and comes to life through the decorations of Valdemar. He painted the walls, the floor, the ceiling, the seatings, the cupboards - even the curtain surrounding the light in the center of the room.

This is a room to dissolve any thought of time and place outside of it. The rest of the world has no longer existed once the door was closed behind them.

As with the brothel they must have been rather sociable, those baronets, showing off their riches, but having a great time doing so. To underline the abundance, it is personified in Abundantia with the cornucopia as the centre piece of the room. She is all in gold, of course. 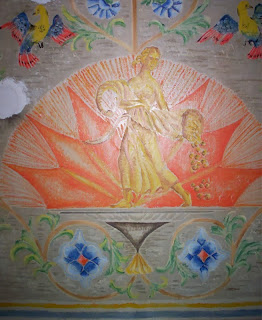 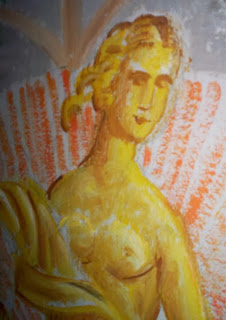 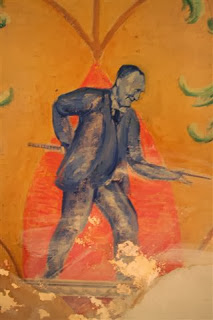 The decorated ceiling centers at the place where the table once stood. But the main attraction of the room and unique of its kind are the sectioned walls. The walls themselves are orangey-red while the sections are orangey-yellow with decorations of birds and flowers surrounded by swirling foliage of a kind only to be seen in fairy tale gardens.

Or rather the Vatican. The direct inspiration came from the Loggia by Raphael, which Valdemar never saw in person. Most likely he had seen the grand books on the subject from the 18th century at the library of Designmuseum Denmark. Since the drawings were not shown in colours, he created is own vision of that side of the matter.

But where Rafael at the Vatican would paint nymphs, Valdemar placed a player with his cue at the center of each section. Each and everyone is busy chalking the cue or making a bold move like this one and they are all are so obviously portraits of the players.

The blue player is a portrait of Harald Moltke, a close neighbour of the Anderssons and our link between artist and commissioner. Harald Moltke was a friend of Valdemar's, painter and renowned for his works from Greenland of eagles, glaciers and Northern Lights. 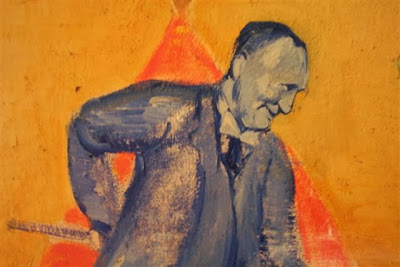 The home of Harald Moltke was once decorated too by Valdemar Andersen. Dragons were flying or clawing their way along his staircase while golden foliage encircled the living rooms. It is now all gone, leaving his house to be just another mass produced villa of that time. Redecorated with unfashionable-before-long wall papers as opposed to the daring walls of the individual.

Let us take leave with the player that might be a portrait of Andersson himself. He is the one you see first upon entering, inviting us to join in: 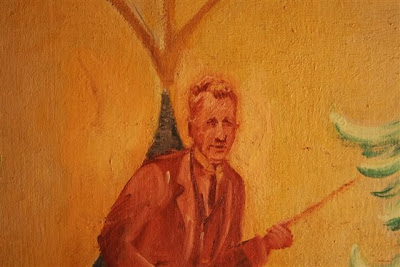 Photos of the pool room are courtesy of Paola Grippo Laustsen, those from the entrance and staircase were taken by me.

ETA: On May 1, 2014 the decorations seen above where destroyed, when a new owner took possession of the house.