Alas, poor Yorick! I knew him. 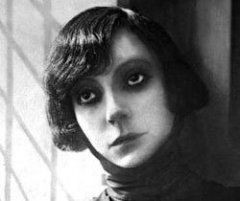 Apart from the skull, Hamlet could be anyone. Which fundamentally he is, of course. There is no iconicity to his figure. It is not that exceptional that he is a she either, only this one is striking in her sharp cut appearance with an iconic predecessor of her own in the silent movie star, Asta Nielsen, when she did her Hamlet in 1921.

Those ringed in eyes. Those lines across the face that they actually produce her doubt, her Angst, her knowing all too much of human weakness. But a knowledge from having acted, not from having shied away.

- The text frames are in German.

And today it is time to indulge in a toast as her creator turns 40: Félicitations!

The cartoon shown is courtesy of Flask and must not be reproduced without his permission.