We are in the kitchen 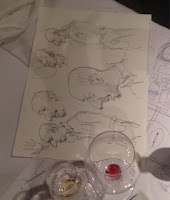 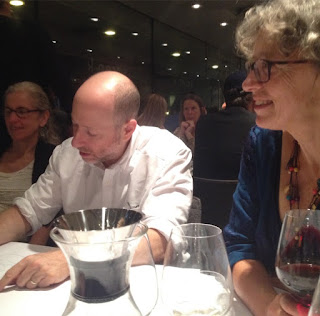 The photos in this blogpost were taken within a matter of minutes while rounding off the dinner following the cartooning master class organized by Erik Petri last Saturday. This turned into as long a sentence as the day had been full of intense hours of drawing and discussing. I am not sure how the present drawing session took off - I suspect Steve Brodner, who has one of the day's keynote speakers got hold of Annette Carlsen's own sketchbook, began drawing and in response she took out another drawing pad.

Besides, we are as humans not supposed to lean back in the restaurant of life. We must never see ourselves as consumers; we shall be in the kitchen doing our bit to the world, in the words of Steve Brodner. 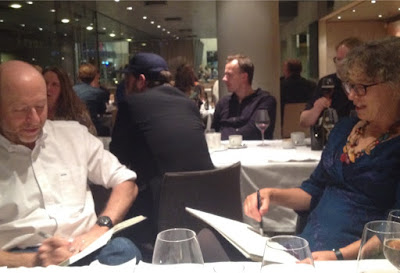 Note their respective drawing techniques. Annette's wrist is busily working in light and floating movements. Her arm is kept still having transferred all movement onto the wrist, making for subtle and hastily drawn lines instantly transferring the impulses from her brain. This is analysis in action. The pair of them is working so fast, their colleagues behind them hardly seem to shift position from one photo to the next. 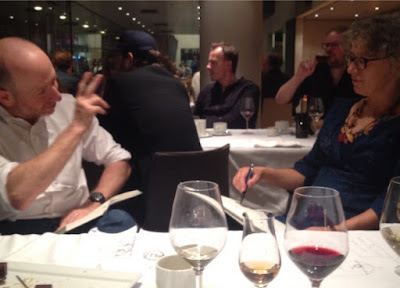 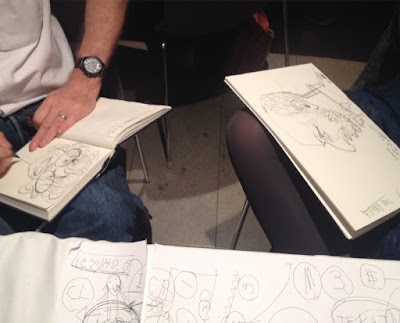 Steve Brodner uses all fingers to sharpen the movement of his pen for greatest possible poignancy. The precision of each line makes it a carrier to the statement of the whole.

- The US history of the 20th century told through its presidents is to be seen on the paper table cover. 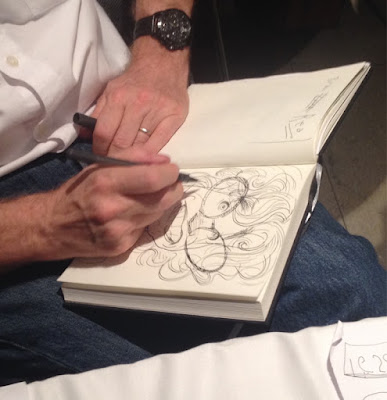 Stereotyping had been a recurring theme during the day since it is a hot topic these years. Especially the classical stereotyping, which sorts the population into categories of "facial hair" or "big this" or "big that". When told to abstain from stereotyping, exclamations have been made of the type of "then what can I draw?!" Not least around here, where everything is outcried as a threat against the freedom of the pen.

Personally I find the perseverance on stereotyping a mental laziness. Provincial not least. "What can I draw if I am not allowed to draw Mexicans with moustaches?" is not the sort of declaration, which will boost the reputation of the profession. Besides, it is valid saying that one is tired of being drawn as a stereotype, in the words of Steve Brodner.

There are Angry Beards in abundance on this blog. But they are bearded by choice, defining themselves as part of a particular group, insisting on blending in to a degree that they eliminate all traces of their own individuality. To quote Adorno, there is even an element of anger to this insistence.

And in that case it is the mask, which shall be addressed, as Steve Brodner underlined. The mask is part of the performance art that is politics. And creating politics is the only type of movie, which is hurting people. Whatever characterizes the politician in his or her private life is of no importance. "By thy mask I shall know thee", wrote Karen Blixen and it is the mask with which the cartoonist is in dialogue. 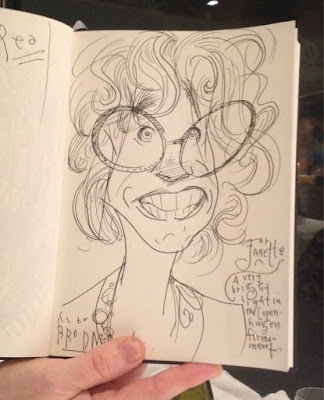 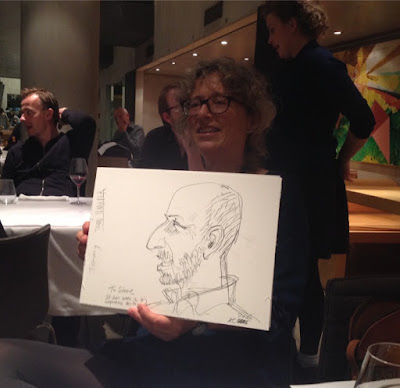 The present two drawings were the antitheses of any de-masking. They were created in a happy relaxed atmosphere, and as much as Steve Brodner's portrait of Annette may appear exaggerated, it is to underline her radiance on all levels, using all of the paper to unfold it before the beholder. The text reads "A very bright light in the Copenhagen firmament". Amen. 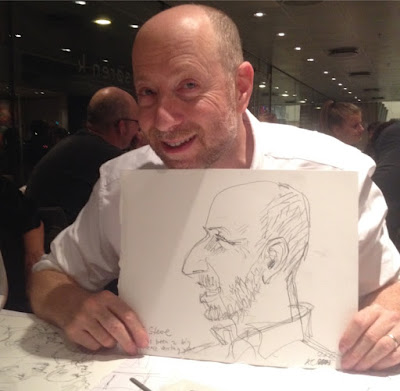 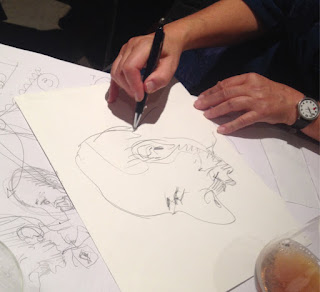 Having posed with their portraits for an instant Annette turned over Steve's portrait, while he was looking away for an second making an even faster sketch of him on the other side of the paper having the outlines of his features in her pen. There is always a new drawing lurking; another endeavor to come under the skin of who this particular person is.