"I am so awf'ly misunderstood"

MISUNDERSTOOD was the topic of the master class organized by Erik Petri last week with distinguished political editorial cartoonists Steve Brodner and Matt Bors, the latter founder of the one and only The Nib, as keynote-speakers.

Misunderstood, as in cartoonists being pressured at every level of the drawing process. The beholders-by-chance for instance, who were not the intended audience, but intending to find every reason to protest. But not least there is the corporate world, at once all powerful and fearful of getting the most out of what it pays for, thus forcing the editors to avoid any hint of critical drawing on the same spread as its own adverts. As stated by Steve Brodner the hegemony of the US is the economical machine; a topic which by the way must not even be touched upon cartoonwise.


A graphic recording was made on the points stated and the historical lines drawn (no pun intended, but doubly fitting in this instance) the whole of which is condensed in Gitte Skov's drawing:

- a drawing which can be read either way, just as its protagonist is doing; the quintessence of the situation of cartooning. A high concept drawing as put by Matt Bors, while Steve Brodner declared it an act of "eloquence" as in being at once elegant (simple) and eloquent (but not too simple).

The drawing was Gitte Skov's response to the task given by Steve Brodner to the attendees: CONFRONT the cartoon with itself. Why wait to be misunderstood? Or rather, let us prove that a cartoon already contains its opposite. It is a dialogue within itself; only in this case cut a line right in the middle with a set of opposites on either side. Make the opposition a visible one. 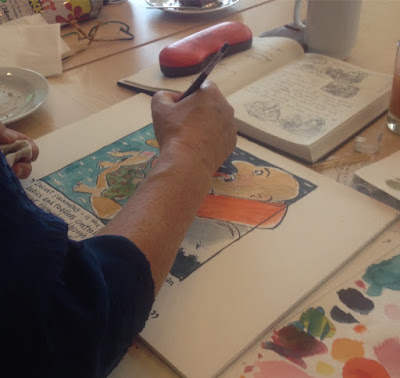 The cartoons shown are courtesy of their cartoonists and must not be reproduced without their permission. All photos were taken by me.