"The white paper was impossible"


The title to this blog post was inescapable in its double association to the white and as yet unadorned paper and the necessity to express oneself. The artist finds it impossible to keep silent, while the prisoner tries to avoid marking the paper in the sham elections of Assad since his taking power in 2000. In unison Sulafa Hijazi and Tarek Alghorani manifest the corruption of humankind in an autocracy.

In the artworks by Sulafa Hijazi bodyparts have been ripped apart. There is no bleeding, no outward reaction. The drama is in the suppression of everything human, while the severed bodyparts are serving the intent of the despot. To the extent that the body grows weaponry. And yet the severed heads have each their expression; every part of the picture planes has texture. There is no surrender into a solid calm. Not even in the red background. Especially not that one in its dense coagulation.

The militarized disease that is and was the Assad regime is addressed by Tarek Alghorani in words as clear-cut as Sulafa draws. Tarek endured imprisonment and torture for 5 1/2 years, convicted for blogging. He was one of a larger group of political prisoners granted amnesty in the spring of 2011 in an attempt from the regime to calm the call for change. His words are poignant on the right to remain silent that comes with the right to speak up:

The rejection of presidential amnesty
It was a kind of luxury and perhaps foolish to think of in Syria
I was not able to legally reject the amnesty, as a kind of protest
A protest... about everything


In states of dictatorship
The right is also a duty
You must elect your president not as a right, but a duty
And you are an observer to the exhibition of chase because you did not exercise your "right"

The citizen has to attend the sham elections
To elect B: Yes or No
On the survival of the president in power

The law makes no difference
I cannot reject amnesty

- anomaly in that Tarek would never fall into his opponent's category, assuming to be speaking on behalf of everyone.

The artworks shown are courtesy of Sulafa Hijazi and must not be reproduced without her permission. A special thank you to her and to Tarek Alghorani for his permission to bring words that were spoken personally and to Tony Daoud for engaging in the discussion. 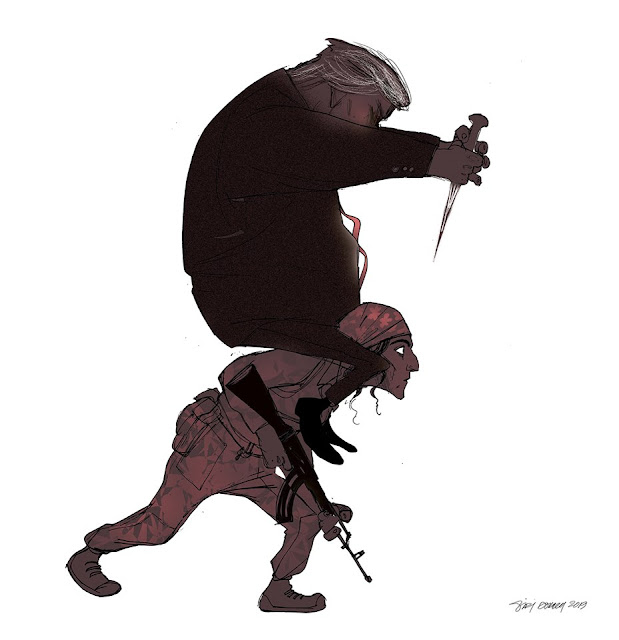 The Chimera of Treason