I just happened upon a discussion on some online-board, one commenter having found a printed page on the Norwegian Queen Maud. Drawn by Valdemar Andersen.

The question running through the discussion was what to think of it. At once ethereal from the dotting as if the reflection from her diamonds is dissolving her, while being a fully frontal and confronting portrait of double size of those beneath her. Regally tall as she is, she hovers over her countrymen, who are bowed into submission to a degree that they are hardly detectable from the mountainous landscape.

Is it meant to be satirical? 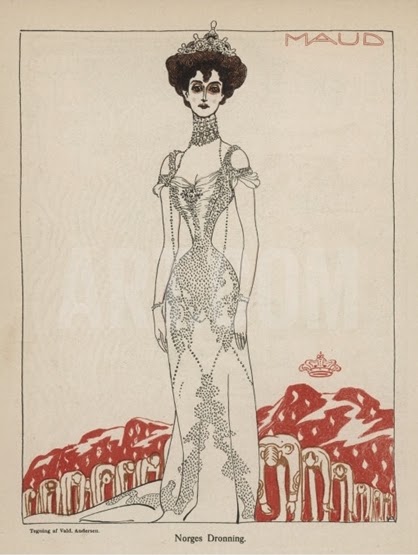 Of course it is.

It was created for the satirical magazine Klods-Hans as a full page print in or right after 1905. Klods-Hans was heavily inspired by Simplicissimus and was a magazine in which authors and cartoonists had a ball taking a closer look at the outpourings of those regarding the public space as their personal limelight.

The interesting situation of seeing her online today is that she is totally out of context. She was not put online because of her artistical value, or rather it was the artistry - the dotting creating a ethereal quality in combination with the thin if clear cut confrontational outline - with which she is drawn, which brought out the disbelief of something not quite right.

What was the political stance of the artist? And with this the implied accusation if she ought to be seen this way?

If Valdemar had been charged with a lese majesty, he would be the first to be proud.

Not that he was a revolutionary of any kind. On the contrary he was very far from being a political animal.

But he was a free citizen in a democracy as was his Norwegian contemporaries. In 1905 Norway turned a fully independent nation, but it had by then had a constitution for nearly a century already. It might have eased the transition to independence creating a new kingdom for Norway, but to the free and logic mind in the year 1905 it must have seemed ridiculous.

Even more so as the king chosen was a Danish prince. Valdemar drew a counterpart for Klods-Hans of Maud's husband setting foot on the Norwegian coast for the first time and being welcomed by his predecessors back from the Viking Ages. I am sorry, I don't seem to be able to find an image of it right now (I will insert it when it turns up, too many GB of Valdemar, it would seem), but the mighty men are not much impressed by that thin thing before them, who is not able to take up an axe to prove his superiority.

It makes the uneasiness all the more interesting right now. The board in question ended up accepting the uneasiness as a way to take a closer look on what they had before them. A major move in the crossroad between any automatic reaction and obeying one's curiosity. We are meant to look at the image as free beings, using our understanding as well as playing along with what we see. Again, this image is of course seen out of context, but the drooping of the arms in the background makes the portrait.

The last thing we wish to mimic are the lackeys behind her.