"We meet at the Zitouna Mosque...


... in the heart of the medina of Tunis with O., a member of the graffiti group Zwewla. On the first night we put up posters in a place that is quite busy, close to a school of traditional music. It is necessary to work in haste. O. explains that the medina is monitored by "guardians", circulating within the walls of the Old City.

A guardian of the neighborhood just so happens to pass by the minute we are finishing doing the paste-up. O. invents a story about a collaboration with the School of Music, and we decamp. O. is quite tense."


This is how Mahn Kloix and Yuvany Gnep open their tale
#SmallisBig: Collages in the Medina in La Marseillaise.

Mahn Kloix is the creator of Small is Big; a project on the iconicity of the public uprisings of the past years from Canada and the US to Spain, Greece, Tunisia and Egypt. 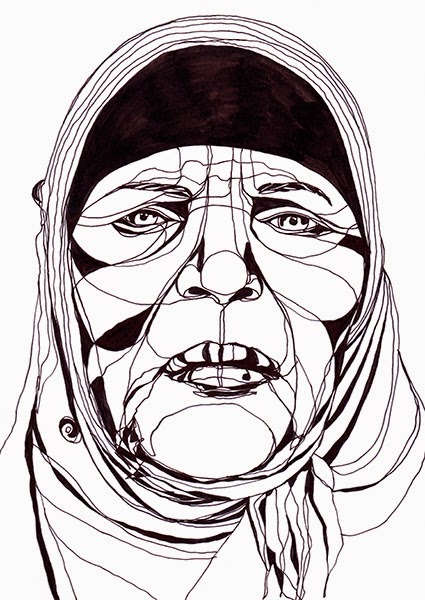 Faces from each uprising as we have seen them in glittery photos, were drawn with a thin line to keep that sense of the sharp crispness of high-definition lights and shadows of their photos, as it befits icons. Each face is a representation of courage, such as El Général, the alias of Hamada Ben Amor, who wrote the unofficial anthem of the Tunesian Uprising, Rais Lebled, or Mannoubia Bouazizi, the mother of the fruit vendor, who literally ignited the Arab spring when he set fire to himself from desperation in December 2010.

Each face was made into a poster to be pasted the very places, where it all took place. Then as before an uprising is made of the many faces, only this time of faces from across the world, being gathered to reflect the situation between then and now.

In Tunis Mahn Kloix and Yuvany Gnep worked together with Zwewla, and the tension with which they are forced to work is particularly poignant; it is still not safe for them to work in the streets. The one thing they themselves but rarely will mention:


The 2nd paste-up in the Medina


Second evening, meeting at 7 o'clock with four members of the collective Zwewla. We hope to succeed this time in working together mixing the stenciled words of Zwewla with Mahn's posters. The messages of the Tunisian collective are the perfect partners to the The Small is Big-project. The graffiti and stencils by Zwewla denounce social injustice and call for the poorest segment of the Tunisian society not to remain passive in the face of the difficulties that beset them, demanding their rights to be respected. So we all set out hunting in the old town and quickly opt for a couple of walls.

The first wall is located in a beautiful archway. Some are standing guard at the entrances of the passage, others take pictures. As it is quite early in the evening, some people are passing by, which makes O. rather nervous. So unfortunately we have to leave before Zwewla has time to write anything. We hope to return later in the evening.

We return to the streets to wander in search of a less crowded place. We stop in another passage. Mahn glue a square af posters, and this time Zwewla has the time to do a stencil. The text of the stencil is a sentence from a Tunisian proverb: "No one is above the law, but everyone is above the poor." No tag here either though: One of the guardians of the medina interrupts us. He talks about calling other guards. O. decides not to go back to the first place and to look for a another...

We wander for a long time, as long as the shadows in the old city, but the designated locations are under surveillance. We decide to stop... with regret because some of the stencils have not been tagged, and there are still six posters left. We are a little frustrated and tired from kilometers of walking, but happy about the shared experience. We decide to leave the posters to the Zwewla members in appreciation of their help; without them our adventure in Tunisia would not have had the same impact, nor have been of the same flavor. And we know they will be used well.

Text and photos are courtesy of Mahn Kloix and must not be reproduced without his permission. Much more on the project, photos and most importantly the posters themselves can be seen here.