Just around the corner from where this is being written, Ulandssekretariatet (The LO/FTF Council, i.e. the Danish trade union council assisting democratic development internationally) holds it yearly art exhibition at Brøndsalen. This year the focus is on Bolivia, Honduras and Guatemala.

An artist of special interest to this blog is the graphic outlook of the Hondurian artist, Darvin Rodríguez. 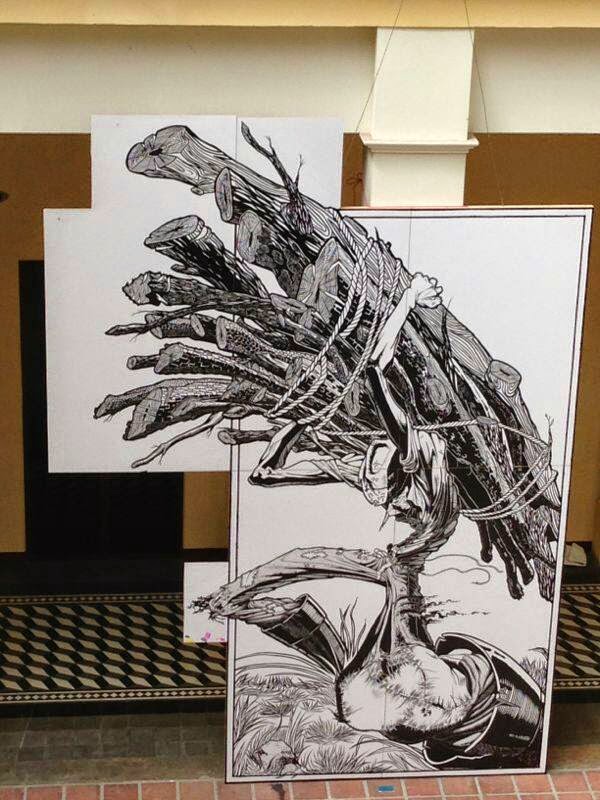 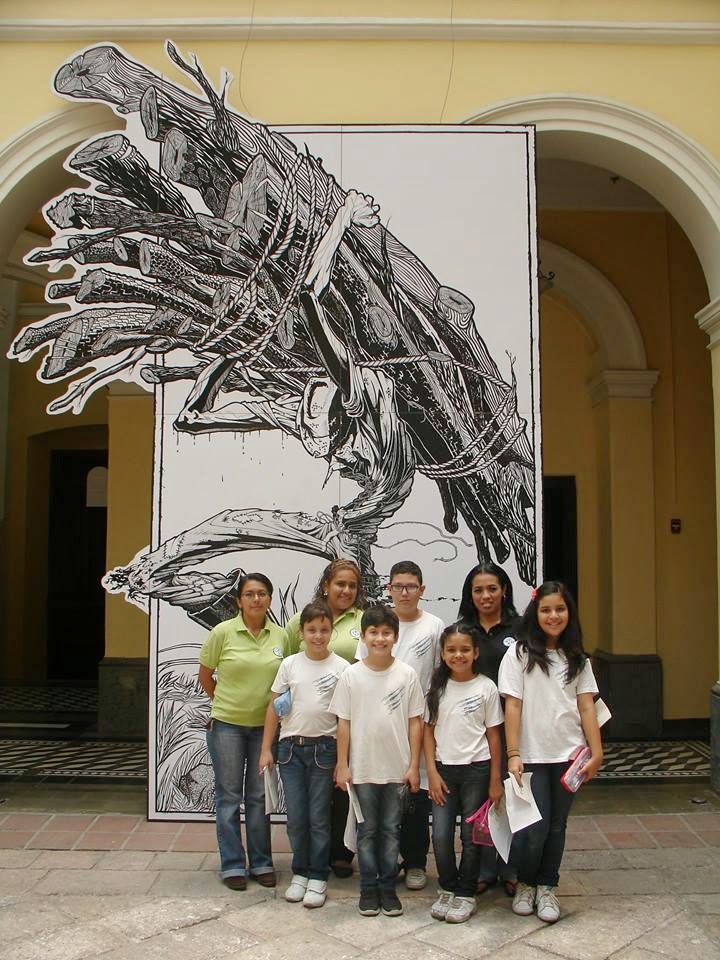 Darvin Rodríguez, the panel Carga - shown too with schoolchildren in front of it for size
Photos: Museo para la Identidad Nacional, May 26, 2013 and May 9, 2014.

Personajes de Acción, men and women in action, instantly recognizable from the super hero universe,  in which the line drawing is a means in itself to tell the drama. At the same time a plethora of detailing, while each detail is told with a minimum of line work. The works exhibited here are photostats of Darvin Rodríguez' exhibition at Museo para la Identidad Nacional in Tegucigalpa in Honduras this spring:

The display in Tegucigalpa consisted in seven monumental scale formica panels about 5 metres high created in situ for the entrance hall. They were accompanied by the statement from their artist that Personajes in Acción is tacit, speaking through its form and concept rather than engulfing itself in a discussion with banal and elusive pretensions:


This is about the immediate reality of the Honduran workers.


The work of Darvin Rodríguez has been compared to that of Roy Lichtenstein in terms of figures known from the comic world, taken from the book page to be blown out of proportions to cover the whole of a wall. Each time the one, highly dramatized frame, frozen in its solitude, cut off from the rest of the tale. But that is to misunderstand Darvin Rodríguez' objective. Lichtenstein exaggerated, what were already exaggerations and meant to be so, in a bid to expose the mental state of Western public life in the Cold War Era.

But what we have before us have nothing to do with the neuroticism and/or emptiness of 20th century middle class life. These are successors of the Grand Muralists, active in Mexico a little over a hundred years ago, with José Clemente Orozco as the one who springs first to mind when seeing the struggles of Darvin Rodríguez' workers. Now as then to create an awareness, a pride and sense of being part of a much larger story, while demanding and initiate change, where needed. It is specifically the latter reaction Darvin Rodríguez addresses.

He uses the positive notion of super human powers, which none of us possesses, to visualize the inhuman working conditions of the poor. We have no victims before us, but the worker going beyond his utmost in the quest for survival. Only surviving means cutting off all that is human in order to get the work done. There is nothing left of the docker, when parts of him is torn off.

Orozco would put the lone giant in the middle of a mythological group, muscles tense in his fight, grand in his pain and surviving in spite of his task. Darvin Rodríguez has stripped the super hero of all company, he is a loner, personalizing poverty and yet without face, dehumanized by the work.

And so, the smallest body part is each time the head, seeing the workers are forced to relinquish all thinking. Instead, the violence of everyday life is thrown into our faces in the embodiment of a hand.

The lines are thickened to tell of the veins and muscles strained. I enclose a still from the video above to bring attention to the two hands, how each joint is bent in a 90 degree angle from the limbs it attaches to, resulting in a sum of anger and desperation, locked in on themselves:

The finished panel is seen below to the right, now with pen in hand bloodying the papers:

And no view of Darvin Rodríguez' art would be complete without seeing himself at work, assiduously fortifying the impact of each line: