"A simple idea to set a respectful monument"


1,087 killed of a total of 6,300 Danish sailors in allied service during the World War II. A heavy percentage indeed, as is the increasing number of martyrs of the Egyptian revolution since 2011, as Ganzeer has said with sad sarcasm: it will probably amass to a 100,000 with time.

Ganzeer was one of the very first who took art to the streets, when the protests broke out in Egypt. He has continued to be a defining voice, proving that there no such thing as boundaries to graphical expression. He has detailed how to do graffiti without being caught, organized events to encourage everyone to take part, just as he continually transforms the visuals of the revolution into a graphic language. The photo beneath is a case in point, in his own words: A simple idea to set a respectful monument.

Which meets a constant theme of this blog on how to make monuments matter, or rather to recognize the value of the monument by focusing on what it does at its best. While daring to pose the thought of removing the ones that are but a waste of their own existence.

A keyword in all of this is the union of monument and movement. A monument is usually defined as a collective statement on something of the past, but rather its focus is on the future. The word monument comes from the very act to "create thought". It was put there in the first place not so much to create memory as an understanding.

The photo above is graphically elegant with the gigantic scale face repeated on the banners, so powerful in its presence that it conquers an otherwise rather non-descript section of public space, in the word of Ganzeer: "white flags with the faces of all the egyptian revolution martyrs faces until this day printed on it with black stencil".

Solving the question of wear and tear, giving the very act of replacement an element of consecration, the flags would be changed every year like the cover of Kaaba, according to Ganzeer. And oh: "Please put the mayor's name or the name of the president or the name of any employee, which is normally he, who's serving his people. Loser government of hypocrites."


The movement of the flag as the very idea of moving our understanding, creating what was not there before, is found too in the poster by Per Arnoldi.

It shall mark the action of the Danish sailors on D-Day. They will be celebrated for the very first time this year on June 6, 70 long years after the fact.

They have a last been recognized with the Danish term "War Sailors". They began their fight, when the war was declared, deciding to go against the official policy in Denmark at the time, leaving their employer at sea, in some cases even committing mutony, to take part. The Danish Resistance was organized at a much later date, while the War Sailors were at war from 1939.

Per Arnoldi has created a visual solution, which with his own words fell into place, once the he put each element next to each other. He has combined the official symbol of the Danish Resistance with the Danish flag by way of movement. Movement is in itself of course the epitome of the sea. The resulting flag is not only tilted in reverence to those, who dared and did - and in many cases died. It is turned slightly in our direction, underlining to us that now is our turn. We have an active part to play in recognizing and no longer forgetting. Their contribution has always been neglected, willfully or indifferently, since they were not part of the war memory on Danish ground. Sailors have the world as their workplace. 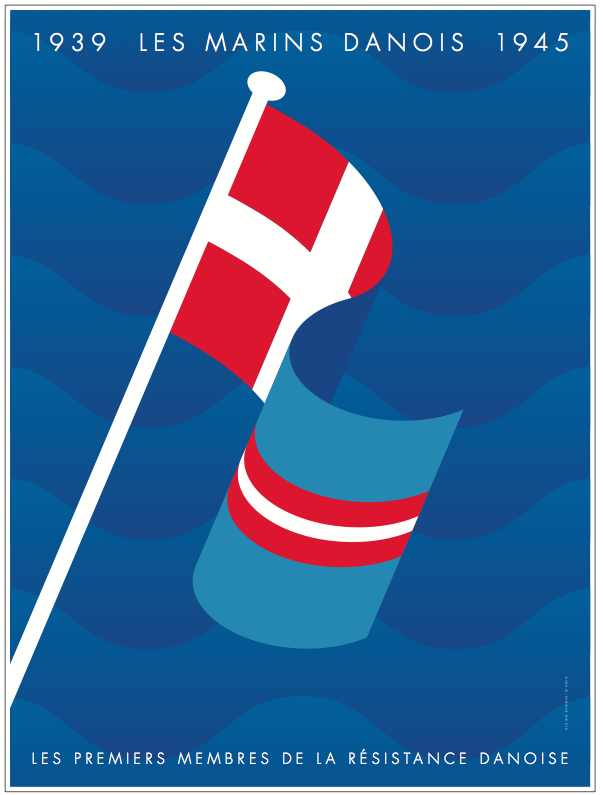 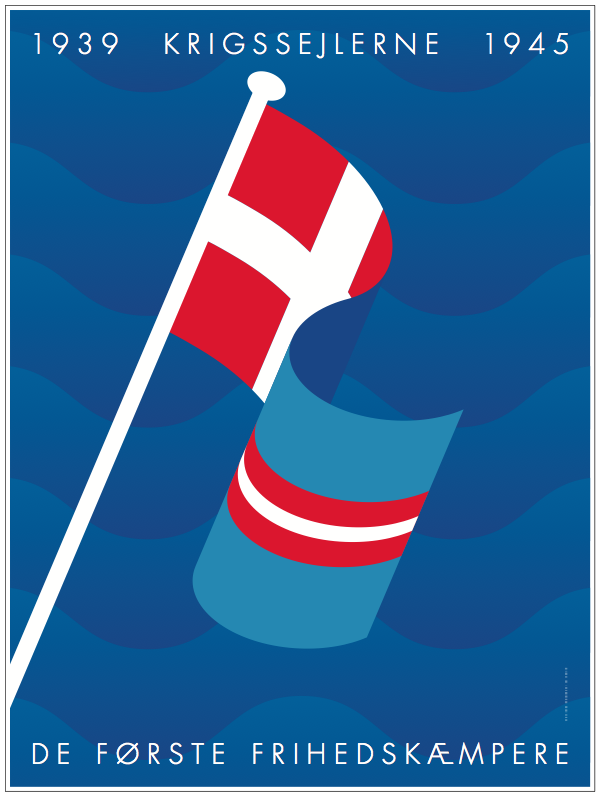 The poster has been created in three languages for June 6. Note how the Danish text seems almost to shout in comparison to the other two. It is after all the Danes, who need to shake up their mental habits.

We have before us two examples of the use of what we traditionally see as fragile materials and yet they posses the very powers, we attach to their colleagues in stone or metal. Not least of interest in our context on this blog, it is the graphic element which makes all their difference.


The posters are shown courtesy of Per Arnoldi and my gratitude goes to both artists. I wish I could acknowledge the photographer, who first ignited Ganzeer's idea. A special thank you goes to Tony Daoud for the translation of Ganzeer's original text.

Email Post
Labels: Ganzeer Monumental Scale Art: When to Preserve or not to Preserve? Per Arnoldi Tony Daoud