This Is Your Moment As A Human

Every day brings the need for new cartoons and so Ramsés Morales Izquierdo had only just returned home from Copenhagen, when the cartoon above was made.

Steve Bannon looking back at the trails leading from him, unable to see the connection and as such his figure is the epitome of Ramsés' pen.

When in town Ramsés Morales Izquierdo gave a lecture to his colleagues in which he defined himself as a writer. As a cartoonist he is a writer of his ideas, transforming them into an image, he stated. A highly interesting point, which he developed further well into the evening, this time exemplifying his work process on paper. 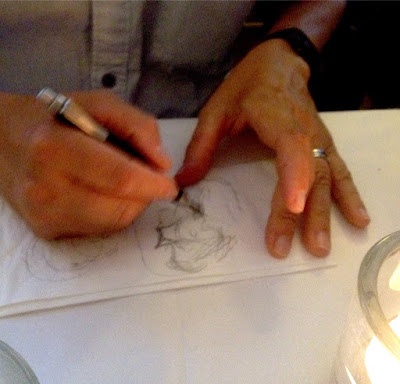 The core notion is responsibility, instilled in Ramsés from his grandfather. The very grandfather, who gave him pen and paper with the exclamation mark: "Begin now!" when the small boy expressed his dream to be published in The New Yorker when he grew up. To a child dream and passion are one, as Ramsés says, recalling his reaction to his grandfather's words: "It was like gasoline".

His grandfather implanted in him a system of belief on how you are as a human, being in the moment that is given to you and answering the tough question before you - and you do it, you need to, without seeking to slip away.

Earlier in the day Ramsés had laid out the history of Cuba. Not just the past decade or two, but the length of Cuban history, stressing the grand personal responsibility of dealing with and to understand when living within a wall away from the rest of the world.

He is now living and working in Switzerland, which means a new concept of life as he puts it, except it makes of course no difference to his grandfather's dictum. Every day is begun with a meditation on what he is doing, seeing himself, visualizing his studio to create focus, listening in. He draws for two-three hours forcing him not to leave his desk except from looking up something.

He is not allowed to do anything else until his grandfather's answer is found on paper.

Ramsés demonstrated doing circles over and over again, while his brain is at work, testing the pencil. As he says, materials were lacking in Cuba and the need to invent is part and parcel with his working process. What he demonstrated that evening at the table, was a circling movement, which began adding in some sharp edges, distilling itself into a human head.

Before us we have the key to his compositions. His cartoons features the person responsible, exposed to us in his or her utter lack of answering responsibly. Ramsés' grandfather's dictum has gained another layer by his grandson confronting the very one with the power to make a difference and who more often than not refuses to give an answer. Such as Steve Bannon above or the Saudi state below representing the human rights in the UN.

We see the betrayal. In steep contrast to the cartoonist, who will underline his assessment on subjects he ought not draw. Such as the troubled Venezuela right now. There is no need to give the US an excuse for military intervention.

The cartoons shown are courtesy of Ramsés Morales Izquierdo and must not be reproduced without his permission.