Pages for a new History of Political Cartooning in Denmark 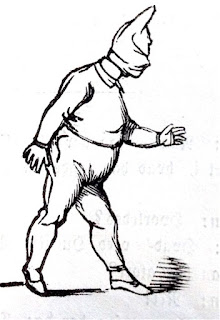 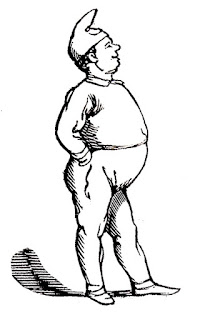 A certain personage keeps popping up in the first generations of Danish cartooning: Hr. Folket (i.e. Mr. People) while still a subject of the King, but from 1849 when he was a citizen in his own right, he became Hr. Sørensen / Mr. Sørensen.

His chosen name was the closest at hand, taking that of his publisher. Not that he had chosen a new master. On the contrary, a publisher is responsible for what he is printing. It is the publisher and not the cartoonist, who enters the courtroom or goes to prison if it comes to that. Responsibility implies a free citizen.

Mr. Sørensen served a double purpose. He would generally be asleep, which was too how he was first presented.

Speaking of satirical magazines, he first appeared in Corsaren and went on to Pjerrot and Folkets Nisse, first and foremost. Peter Klæstrup was his cartoonist, but he was to be drawn by later cartoonists such as Knud Gamborg.

Being a visual character his main characteristic was his lack of all things visual. He had a soft, rounded belly and soft, rounded features. He was the next thing to a non-entity.

The only thing akin to a revolution on him was his nightcap with reminiscences from the French revolution. The possibility of his rebellion was a constant presence.


And yet Mr. Sørensen remained in contrast to the European uprisings that were not far away in geography and time. As such he was a harsh comment on those busy declaring national characteristics, such as the author Henrik Hertz who in a 1839-novel described the "foreign disease" from which the young was suffering.


No, as Hertz pointed out: the Danish culture was an old one, based on the mutual trust between the King and his people. Demanding it all written down into a constitution was nonsensical! It only served to undermine everything, Hertz declared.

Trust, moderation, calm, and speaking quietly were the typical characteristics with which the Danish culture was described, with a direct political aspect to it, as Hertz was but one example of. He knew very well, in fact he wrote because of it, that journalists were being censored, some for life by the King at the time.

So Mr. Sørensen was phlegm impersonated. The no-one-in-particular as opposed to the loud and personal voices of the "foreign disease".

His mere presence was a mocking of the "Danish" characteristics, exposing the weakness of body and mind of it. Calm and moderation was translated into compliance. None of which should be lauded, but declared a problem.

It was a clever move not giving him any of the national symbols, which were newly sung at the time. He could have been an farmer with heavy wooden shoes pondering on the harvest in the setting sun. Instead, he was a citizen. Someone with a wife, children and a home, but they were hardly even delineated.

He was drawn as the one paying taxes, having wishes and anxieties, he was asking questions, because that was the other side of him: he was everyone.

He surveyed negotiations between states, when he did not undertake them himself, showing that the free citizen forms part of that state negotiating.


He negotiated the right too to get out of the nightcap and into something more dignified.

Every time he was told that was an honor that did not belong him, not yet at least. He had a job to do.