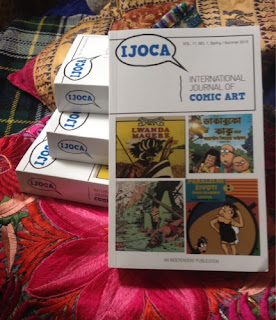 The present blog post is a case of indecent advertising on the new edition of International Journal of Comic Art, vol 17:1 in which Søren Kierkegaard, Per Marquard Otzen, Peter Klæstrup and I inhabit a few pages with the article "Comic Composition; or When Kierkegaard and Cartoon Art Took to the Streets "


Below is an excerpt on the definition of Comic Composition:


"Yet, we can guess at the main outlines of Comic Composition and consequently formulate the rest. Kierkegaard's intention for it was straightforward. Ridicule on its own is empty and grim and is nothing beyond the duration of the laughter. The humor, which has a structure for itself, may prove to be of value.

Hegel for one had already given his view of the matter. Whereas tragedy, the grandiose, addresses what lies beyond time and space, comedy relates to what is man-made. In other words comedy puts the light on the norms that encompass our way of living and seem so obvious to us that they appear as if bestowed on us by a higher order. Norms can thus be reversed with comedy as a place for creating awareness and for potential change. Comedy creates action.

Which was the part the young (editor of the comic magazine Corsaren) Goldschmidt had not yet understood. When first confronted with the Kierkegaardian task he understood it as the application of sharp wit using the tip of his pen to wound. That would to his mind equal the intellect being specific rather than showing off intellectual wit in the general. In his eagerness to have Corsaren addressed on print by Kierkegaard, he saw an example of such wit. Goldschmidt gave back all he thought he had in him.

But the philosopher was not advising a tennis game. On the contrary the Hegel-inspired Kierkegaard had at one point added according to Goldschmidt that Corsaren lacked "seriousness, reverence, awe".

Kierkegaard for one did not invite Corsaren to harm anyone but himself. His daring to be the almost intentional self-mutilator as described by Camus was not a role, but part and parcel of his striving and one which resonates with his readers 200 years on. The most ardent of whom are teenagers. In Denmark we read Kierkegaard in our teens. We read him at the age of brooding when all words sink in, finding a resonance in his passion, his questioning being the unfit in a dysfunctional world, feeling the pain in everything. We see him as an ideal of being unfit".


The rest of the how and why is to be seen and read in the International Journal of Comic Art.


The Cartoon shown by Per Marquard Otzen is courtesy by him and must not be reproduced without his permission.