This is a tale of two artists, although that is not how they are known to the world.

The one is an authority deciding on right and wrong in society. The other is the victim daughter of a victim. The female child of a woman of no worth according to the world she was living in and yet she was raising two intelligent young girls.

Till now the story has been told the other way round. It was told through the man, who had found a cause in life.

He was a serial killer.

He murdered women, who had been forced into prostitution as a last resort to make a living. Some had a drug addiction to cope with the conditions of their life. 16 women lost their lives when they came across that man. Some of them had children waiting for them at home.

The murderer would return to the place where he had dumped the latest body much like a pyromaniac can be found among the onlookers excelling in seeing his flames.

At one point the investigator/judge - because the two are one and the same in Iran - exchanged words with the murderer. Saïf Hanaï gave his killings a moral reasoning: His hometown needed cleansing. While the onlookers were expressing their sympathy with the life lost, Hanaï spoke out on God looking on in approval that someone had taken it upon him to cleanse the corruption of the streets.

Mana Neyestani has created his graphic novel L'araignée de Mashhad on a true story, of which a documentary And Along Came a Spider was made by Maziar Bahari, with Roja Karimi Majd interviewing the murderer in prison. Both journalists are internationally acclaimed, now living and working in exile. 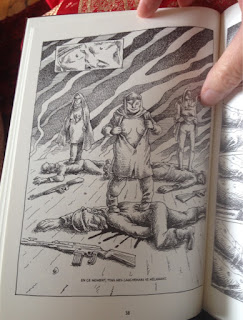 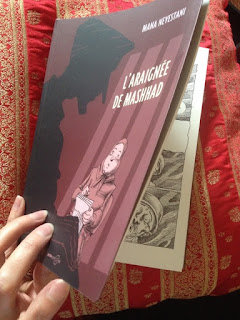 A well-documented story, the fact of which Mana Neyestani takes to another level through his specialty in the meticulous detailing. The already known is taking to their extremes, such as the inclusion of the noisy pattern on the floor in the interrogation room, in which the journalists were allowed to film the murderer.

Mana Neyestani keeps his distance from speculating on the mental disposition in murdering prostitutes. This is not about sexual arousal nor is it about the one person. This is a story about a murderer, which is not at all about him.

Hanaï is the symptom of a corrupted society, as opposed to usually blaming the women forced into prostitution.

Hanaï was the result of sending young men into war on behalf of the state. Those who return twist the reason of war into civil life, finding mockery where there is none, seeing adversaries, which need to be removed in order to win the justice of war.

The artist combines in composition what others need to leave hinted at. Half-naked women seem to step on fallen comrades. When Hanaï's son explains his father's murder technique step by step, laying out the brilliance of the deed, a murdered woman is laying at his feet when we leave the scene.

Mana Neyestani lets in the tiny fraction of a satisfied smile on the boy's face when lying on this knees strangling the pillow. A repetition across a spread of two pages in the book is each time not at all a repetition by the time the very drawing is shown for the last time, even if the portrayed insists on having given away nothing.

Mana Neyestani constantly takes us to the cracks in the tale. In the documentary the judge is sitting in front of a wall that has seen much better days. The judge in Mana Neyestani's novel is then a calligraphist, inking out the religious principles of all living matter. Balance is an inner truth to be sought and found and immediately put to the test as the inked paper is framed and hanged to cover the cracks for a little longer.

Hanaï was hanged to hammer home, who gets to define right and wrong.

He challenged the power of those in power. In one of those scenes heavy with twists and clues of which the novel is brimming, the judge discovers his lunch bread takes on the divine balance when divided and shared with his driver. His driver on the other hand notes how none of the good fillings found their way into his half.

The epilogue diligently describes Hanaï's anger, when he realizes the hanging is going through in spite of his conviction of being a public hero. His anger is written, not drawn.

All the while a little girl is drawing. Samira opens each chapter just as she gets her very own. She is testing and trying her skills to be able to one day to tell the tale of her mother to the world. A tale of how pretty she was and how kind.

This is a tale of two artists, created by an artist.

Oh, and all of the above is but the outline of what Mana Neyestani's L'araignée de Mashhad contains.  It is a many-layered tale deserving many an intense reading. There is a son not least, who has found a goal in life in his father's example. He is one of how many?