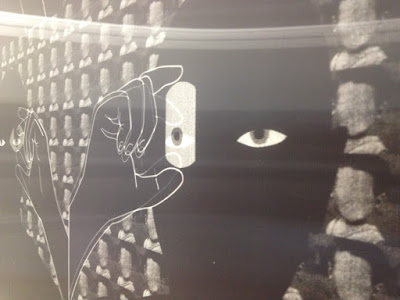 The words above was in fact a much longer, beautifully winding impromtu monologue on the necessity of looking for the best in man, when everything is at its worst and spoken by Muhamad Ataya, who as a documentarist is following five Syrian artists in exile. We in turn did not even dare take out a smartphone to film the one, who had till then never spoken nor been documented himself.

We would not dare interrupt what had suddenly turned into that rare embodiment of a now. This was Adorno's appeal how critical art has a greater role to play than ever, spoken while surrounded by the exhibition walls of Animated Images by Sulafa Hijazi: 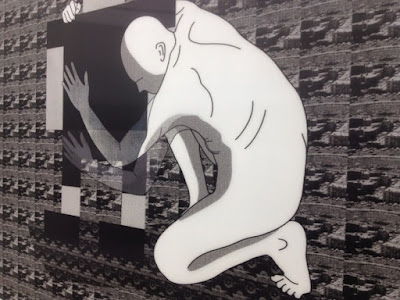 The above video was made by Sulafa herself, as were the "stills" as they are of her artworks printed in "Lenticular print technique". Each image moves with us in the room transposing or transforming the bodies therein.

Apart from the one notable exception of the exposed women - exposed but without the right to express themselves - the body is every time the male. A human form, which is not allowed to show emotion according to our cultural mores, whereas the female body already has its victimization. The effect is thus all the greater before us.

The outlined body is historically linked to mass man at the opening of the 20th century. The stark white emptiness within every human form present in the dense drawings by Winsor McCay is just as terrifying in Sulafa Hijazi's work. Both artists manifest a danger against humanity by way of keeping intact the human form - the outline - while exposing the lack of anything within; the impact of which is all the stronger by being reflected in large numbers. 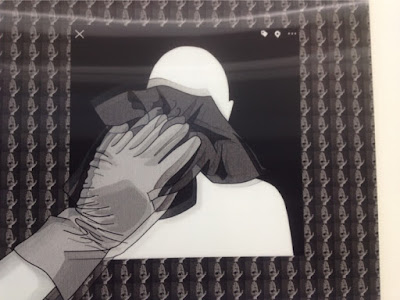 The stark emptiness is all the more striking to our eyes when seeing the suffering taking place. Wiping off someone's identity is a violent act. Yet, we watch just as we see the pattern forming from repeating the same tiny format image within each frame, bringing to mind the texturing, with which Sulafa has always been working. They have blossomed into their own tale, or rather exactly not, as it happens.

We crave images to a degree that we make their subject matter extinct. Directly so in the sense that they lose their distinctive meaning while transforming into decorative patterns before us. But these were photos of war machinery found on the Internet, documentary material in which their drivers showed them off for their structural beauty, dedicating themselves to their care. We are willingly seduced, ignoring all context.

This is all created by us. We are the ones, who set the violence into motion when we walk by - the dangling from the noose and wiping off the face. Just as we set off the embrace of our new collective identity: Our grandfather as it is in the very first pixeled body. 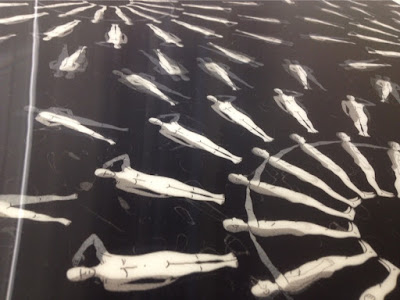 All the while there is a necessity to our digital existence. The Syrian diaspora needs social media to stay in contact and keep finding a reason for living. The most layered of the prints is of smartphones upon smartphones of which the repeated image is of Sulafa herself.

The critical self-reflecting art. Muhamad spoke of its necessity, prompted by Sulafa's very artworks there at the very center of the floor of her exhibition. This is the living example of the dignity for which the Syrians have been aspiring. And the grandest thing of all is that it is an aspiration for dignity they have been setting forward on behalf of us all.


The artworks shown are courtesy of Sulafa Hijazi and must not be reproduced without her permission. All photos were taken by Sulafa.