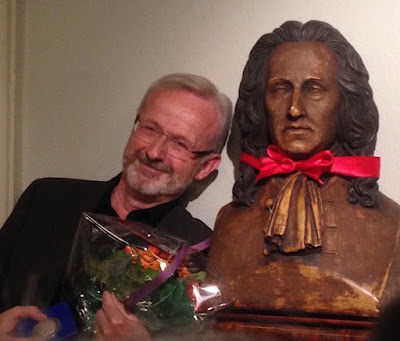 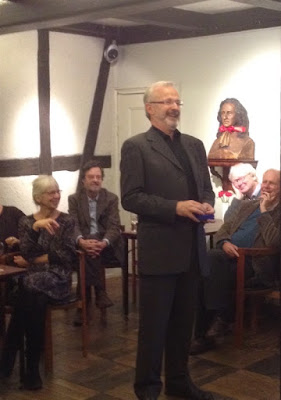 Holberg to the right is in festive gear for The Holidays. He turns - just a second... 2016 minus 1684... 332 years today. May I as a Louise take another second to note that he was a Ludvig? The playwright of comedies and essayist and oh so much more Ludvig Holberg celebrates his 332nd birthday today and every year on his birthday we celebrate in his name those who enrich our lives.

Such as the very person, who after his predecessors had agonized for 6000 years, proved that THE TRUTH is to be found in a comics album.

Ivar Gjørup was awarded this year's Holberg Medal as a researcher and creator alike. He is a distinguished researcher into Plato, while he as a cartoonist has drawn meaningfulness and nothingness alike. Realizing the former may prove fatal as it did to one of his protagonists in his (sorely missed) comics series Egoland, which ran for 25 years until 2009, while his Socrates let his readers graduate last year with a Diploma into nothingness.

Ivar's Socrates and Plato's Socrates... Before we enter into a linguistic battle on Socrates in the plural, let Plato be our plead to Ivar.

Ivar Gjørup has just published a magnum opus on Plato, which will be an instant bestseller the day it is translated into English. May the day come soon. May in turn Ivar's next project - one of them! - be a drawn opus on Plato.

Plato wrote in images and it is high time he shall be dialoguing in and on imagery with an heir to The Truth, i.e. a cartoonist. May Ivar's interpretation below on Plato's Allegory of the Cave be but the hors d'oeuvre:

The cartoon/comics shown is courtesy of Ivar Gjørup and must not be reproduced without his permission.