A special note for this blog's numerous Ukrainian readers. As of tomorrow and until June 5, Oussama Bouagila shall be in Lviv for the workshop presented below. He sends you all a special greeting hoping to see as many of you as possible, while he is in Lviv.

Oussama is active in Zwewla, which uses graffiti to create awareness against poverty and abuse of power and they took to the streets along with the very first demonstrations for democracy in Tunisia in January 2011. Since then he has conducted several workshops, teaching and inspiring even the youngest to create change by way of the visual presence of difference:


The workshop in Lviv is titled:  Artivism Drives Democracy


"ARTivism Drives Democracy
from tomorrow on in Lviv-Lemberg / Ukraine

Discourse of 50 art activists from 8 countries for practical interventions into the crisis of Democracy in our countries.
Two weeks training camp for artistic actions for a Horizontal Democracy.

The AGORA - A PUBLIC SPACE FOR
ENLIGHTENING IRRITATION AND DISTURBANCE
will be used as an example to implement it into our cities
(Athens, Hanover, Athens, Augsburg, Florence, Oslo, Tunis, Lviv, Belgrad, Eindhoven-Amsterdam)

We want to activate public space as a discussion panel and think of the city as a place of creation with the right to meet, participate, exchange, big celebrations and collective designed and used
urban space.

Let's use the public space to give more power to the people, to realize an open social Democracy everywhere!! We want to create a long term partnership ARTIVISM DRIVES DEMOCRACY after three years preparation."


Have a great workshop and hopefully you will give Oussama a busy time! 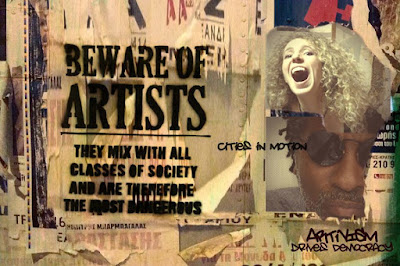