The Basics of Human Life

This is what happens when the British are in town. The young immediately take from their example, incorporating just about every detail of what was discussed at the master class presided by cartooning masters Steve Bell and Martin Rowson for their Danish colleagues. Fur cup? The explanation is in the pronunciation, it transforms into a four-letter word, when spoken out loud.


To declare fuck you to the potentates of our day, political and otherwise, is our job, in the words of Martin Rowson: "It stops us from going mad at what they do".

As it happens, said potentates have the very same bodily functions as everybody else and for 300+ years the British cartoonists have been deflating those egos, exposing their most basic needs all over the pages, all the more forcibly so since they have so much to empty themselves of:


"Like us they shit. Those who think they are better than us are taken down. Besides shitting is fun".


Note, how far we are from the question of negativity, we have covered before. Cartooning is an intellectual field, cutting to the bone of the matter, using the analytic needle to puncture, what needs puncturing. Pompous bladders not least. As Martin Rowson said, he used to call drawing voodoo, but really it does magic in taking something and filter it, taking control and stealing souls while doing so:

"We are not doing illustrations of thoughts. We think through drawing".

Drawing is not expressive, they both stressed. It is considerate, the idea is plotted in advance and then worked out while drawing, seeing whether the idea works.

It takes discipline not to dismiss one's first idea while drawing. So to keep the vibrancy of it, Steve Bell pencils in rough as an indicator, inking it up along the same lines. It takes four hours of working fast on an adrenaline high, Martin Rowson added in:

"I get angry and then I spend four hours doing water colours".


Angry at the doings of politicians and the major fear is to fall in love with those drawn. "I lost my reason for living" would be the case, if so.

Yet, of course there is love involved, just as the politicians are keen on their side to prove their sense of humor. No politician would dare sue; it would be the end of their career.

Businessmen do, on the other hand and overall there is a tendency to declare "offence" lately. Declaring oneself "offended" puts a stop to all argumentation. The rule of social engagement is broken and THAT is the actual offence, according to both cartoonists.

Which brings us back to the feces and the exposure of backsides and with them the Bill of Rights in 1689, which established the freedom of speech to a degree no politician would dare touch it. "We always win" when prosecuted, as Rowson and Bell stated. The certainty, with which the statement is expressed, remains so far a dream prospect for the rest of the world.

Even in a place such as Scandinavia, where our freedom of speech is guaranteed. For one thing the British has a lead of about 150 years, whereas ours did not come about until the 19th century. The certainty of it is not looked upon with the same assuredness and Martin Rowson made an interesting point in the German Occupation in 1940-45: We have known instances here in which the freedom was abolished; it may happen again.

And so it made all the more reason to take from the British inspiration while the chance was there and the dialogue between Mia Mottelson and Josephine Kyhn, ought to have been podcasted. For two hours they would give inputs to each other; professional reflections such as "oh, but do they dangle below?" or "that knob there" and "it should have more green to it".

Josephine Kyhn combined the Danish Prime Minister, Lars Løkke Rasmussen our reputation as a country of pigs and a new (senseless and superfluous) system of labeling meat in which spam gets but one star. Such as in this case. "He is a funny looking little kid", as Steve Bell concluded on his on take on the same man.


Below is the reaction of the masters of the profession on first seeing Mia's drawing, shown above here. Humans have been around for 150,000 years and have been drawing for the past 40.000 years. In comparison we have had the written word for measly 5,500 years. We have in other words been drawing for 1/3 of human existence, Martin Rowson pointed out.

Drawing is as basic to humans as what they do when drawn. 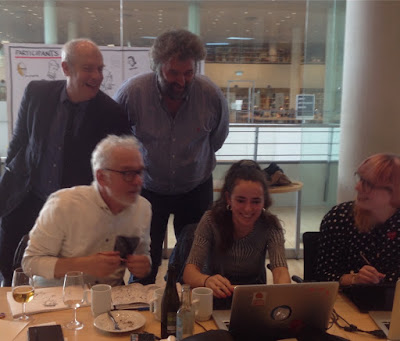 The cartoons shown are courtesy of Mia Mottelson and Josephine Kyhn and must not be reproduced without their permission.