Of Necessity and Destruction

While protesters were busy destroying a new memorial at the Tahrir Square, the artists were no less occupied in the Mohamed Mahmoud Street demolishing their own works and those of their colleagues.

Demolishing is perhaps not the right word here. Camouflaging they call it in the vein of what the military does. Dazzle paint in pink, hiding the artworks just as the truth is hidden in Egypt by its men in power. Add to that that the artists have taken on the very action of their adversaries, a demonstration of who is has the upper hand.

Layers of destruction. The video above is a year old, showing artworks that are no longer visible beneath newer works which in their turn were dazzle painted last night. Alaa Awad comments on the stubbornness that emerges from the destruction, the urge to paint that grows yet stronger and more intensely so than before when something is removed.

Ammar Abo Bakr's murals were mutilated yet again last week and this time taken to a state that was somehow back to basics. Even their first destruction by black paint is removed, so that we see all four states of the mural in one and with a presence as strong as ever. Not least from the fact that the middle girl's eyes and the tip of all three wings are untouched. These are murals that by now have layers enough for a dissertation on present day Egypt, the struggles, aims and interests, fears and anger, and the political, cultural and sociological implications of it all.


However much it hurts seeing artworks of this caliber disappear, it is the proof of their significance. If they were left untouched, they would be mere decorations. Hans-Georg Gadamer, the philosopher and a beautiful man in himself with a life-span across three centuries touching upon what seemed eternal life, named the decorative for a Stimmungshintergrund or a begleitende Wirkung, a backdrop or frame to create the right feeling, but not an end it itself and certainly not something to make itself heard.

So a mural with such a thing as opponents is in this sense a true member of the arts.

The more so in this case with opponents ready to make a spectacle of killing off the surface. It is a visual battle with all parties acutely aware that the visual winner will be the overall winner and from the interaction has come not just the cultural importance, but new artistry too.


I for one gasped when I saw the mural underway on a wall of the American University Library at Mohamed Mahmoud Street. It is not just the gorgeous unfolding of talent and artistic willpower, but there was an instant recognition of what another artist could have been and should have been. He would have been 150 years this year, so even if he lived to be close to a 100, the street today is a little out of his timely league.

But those almost 100 years were spent on the strife, struggle and fight to do his utmost as an artist. He - the Dane J.F. Willumsen - worked in all media, the greater the canvas or the stone the better, the colors strung to their highest, his foreshortenings are almost violent in character, using religious imagery of the tiger, the sun and the burial cave. His drive was monumental in character - but it was spent on making himself his own subject, expressing his personal monumentality as a divine being qua artist. Not least, there was his relief on himself, created over a 30-year period. And oh, it is so grand, but oh, so boring.

All in all there is a feeling of a greater need in a talent not quite unfolded in spite of his grandeur. And so, the strife, the insistence and the gorgeous colors are instantly recognized in the mural today, but here lived to the full in the the mural by Abood and friends and I felt such a wish that Willumsen had been able to take part on the streets of Cairo right now. He would have loved to find an answer to his artistic need, the indignation behind and the danger as part of the painting process - and with a height close to 2 meters, he would not even have needed a ladder most of the time.

We can still see Willumsen's work, while it is too early to tell what will stand the test of time from the Egyptian streets directly or in memory. Shehab Fakhry Ismail wondered in October if it can even be called art, feeling he has seen little or no artistry, since the need of the murals has been for something else, outside art.

There has been what he calls an internal pressure not unlike what took place in the Soviet Union where the social realism was treasured while the artistic freedom was suppressed as dangerous and at best unnecessary.

And yet, if the effect was to be solely political, it would not be so difficult to write this while distracted by the gaze of the lion to the left and above of this text. Proud and resting in the knowledge of its own worth even when confronted with the military in the shape of the serpent. It is created through two layers of yellow, the one smaller and darker than the first, creating an understanding of three dimensions, with an intricacy in the pattern to create movement in the fur that disproves any claim of a "lion = symbol of Egypt"-simplicity.

We all know instances of bad political art, but the author, former prisoner of Auschwitz and dissident of the Communist Hungary, Imre Kertész, has stressed how it became one of the characteristics of the 20th century to separate politics from culture. They became each other's enemy rather than of the same source. And politics freed from culture becomes destructive, Kertész continues, because values are destroyed and taken over by ideologies.

Ammar Abo Bakr was interviewed not long ago in which he stated that revolutions always rise against ugliness, just as politics is the ugliest game. Two times "always" in which the aesthetic and the need for change was not just underlined, but connected as being dependent on each other.

For his part Willumsen was a constant outburst: I am here! But in comparison to the life of the pink wall above, when even what was painted before is only just shining through, well?

- since the photo was taken, the military has answered back, blocking the street with tanks. And the artists, they are working on the new canvas created by the pink dazzled surface. Ammar Abo Bakr did this today, the martyred child, Sayed Khaled: 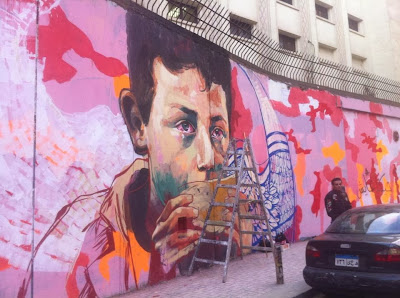 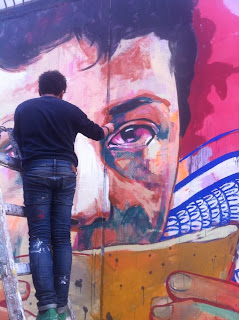 All artworks and their photos shown are courtesy of their artists and photographers and must not be reproduced without their permission.